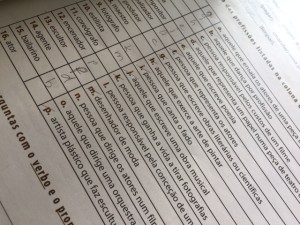 One of the things that I love about moving to Portugal is that it gives me the opportunity to learn another language. Maybe I’m a bit of a language nerd, but having lived abroad most of my adult life, I think knowing at least some basics is absolutely necessary to integrate into society – at least if you are planning to speak to people. Since I decided to move, I have, therefore, been starting to get to grips with Portuguese. On a personal level, it has been easy in parts (I speak Spanish reasonably well) – but on other levels it is pretty complicated (“How is this pronounced  again??”).  Anyway… here is a bit of a lowdown of my “language journey” – and hopefully some useful hints if you decide to learn the “lusophone” language (geek talk for Portuguese).

First of all… you probably need to decide which Portuguese to learn. There are ultimately two choices: Brazilian Portuguese or Portuguese Portuguese. Unfortunately it is not quite as easy as American or English English, as both have a lot of similarities …. but also some big differences: For example, Brazilian doesn’t use the “tu/you” (2nd person singular) to address people – so if you opt for that, you won’t learn it. That’s pretty fine if you want to speak to people in Portugal formally, as the Portuguese in Portugal use “você” in formal situations instead of “tu/you”… which happens to be the same form for that the Brazilans use for everyone. In other words, if you try and speak to someone informally (think meet nice guy in a bar and want to ask him if he’d like to have a drink with you… ), if you’d have learned Brazilian Portuguese, you’d say to him formally something similar to : Does he want a beer? …rather than informally asking him “Do you want a beer?”.  Of course, I’m sure he won’t think that you are intending to address him as you would his grandmother…. but sometimes small things make all the difference. There are lots more of these little differences… so making the choice is pretty essential. Note: As you can imagine, Brazil is a big country with lots of speakers – so many classes teach Brazilian Portuguese as standard. So things get a little tricky if you want to opt for European Portuguese.

Luckily, in London, you can actually opt to learn the one or the other: I searched around quite a bit, but finally decided to go for lingua direta, a school that specialises in teaching Portuguese. Because they specialise in Portuguese, they actually offer both European and Brazilian courses (and also Portuguese for Spanish speakers, if you speak Spanish really, really well). I opted for the European Portuguese course – and had lessons there from the beginning of the year (two courses so far). I can honestly say, I totally recommend them. While the first class was a bit large (I guess many people just try and dip their toe in), the second course is much smaller (we are six in class). We had the same teacher for both courses, and she is certainly great: and if you have a practical question, she is more than happy to help beyond what is in the text book (think asking about writing an email in Portuguese…).
One other advantage is that the school offers “catch up/revision” Saturdays every few weeks: Basically those are free courses that you can go to and ask questions about anything that you are not sure about. As Brazilian and European Portuguese students both join the same revision days, it is also a neat way of figuring out a bit more about the differences and similarities without getting totally confused.
Of course, I can’t really tell you anything about other schools in London teaching Portuguese and how they compare… but I definitely feel that I made the right choice with Lingua Direta.

As I have quite a bit of holidays to take this summer before “finally” leaving my job and moving … I also looked for some summer courses in Lisbon. Of course, there are plenty of language schools in Lisbon, so if you want to look in the commercial sector you probably have quite some choice. I ultimately decided not to go with a specialist language school, but rather stick with a university summer school.  For Lisbon there are two choices: Summer schools at the Universidade de Lisboa (University of Lisbon) – or Universidade Nova de Lisboa (New University of Lisbon, aka Nova).  Between the two, UofLisbon seems to have the much,much bigger program: they run courses in July, August and September. Nova only has one course running in July. I decided to join the Nova course, simply because July seemed a good time to go – and they were quicker at answering emails. Another selling point for me was that the Nova staff quickly pointed me in the direction of their university halls as a pretty cheap and convenient place to stay (oh… and I haven’t seen one of those from the inside for 20 years…). I’m not quite sure why non of the commercial providers nor the universities I saw seemed to offer “accommodation inclusive” packages…. After all, it seems like a no brainer that someone coming for a month to learn the language need to sleep somewhere. Anyway, that is starting in July,… and I’ll definitely update you on how I get along after taking the course.

If you want to learn Portuguese, a more extensive list of universities offering Portuguese summer schools and accredited commercial courses can be found on the website of the Instituto Camoes – the sort of British Council/Instituto Cervantes/Goethe-Institut of Portugal. Of course, if you have any additional hints or tips where and how to learn – or experience with courses … please share them using the comment section below, or get in touch via @urbangay on Twitter or urbangayblog on Facebook.

A short history of Gay Portugal – From Rome to the Inquisition

One thought on “Learning Portuguese…in London and Lisbon”