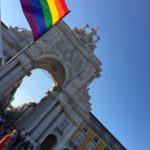 Friday was finally the day, and it was “bye bye” to Brexit-land – and hello to Lisbon.  Of course, I didn’t expect my leaving day to be quite such a dramatic day in the British and European landscape… However,  Brexit certainly had quite an effect on what I planned as a quiet traveling day, and just before hitting the second of the Lisbon Pride celebrations, Arraial Pride, the day after arriving.

To be honest, the first day in Portugal was a mixture between shock about the referendum result, and absolute tiredness. I made the massive mistake of staying awake when the first results were announced – and couldn’t stop watching all night. Thus, bleary eyed and in need of strong coffee, I caught my flight to Lisbon on Friday. Keeping an eye on the breaking news I arrived in Lisbon, found the place where I’m staying – and decided to go for a walk. The bright sunshine was good and almost made me forget that I hadn’t slept the night before. Nevertheless I decided to have an early night – not least, because I wanted to see Arraial Pride the next day. So… early night – and the next day I felt refreshed and started with a walk around central Lisbon, had lunch at Mercado da Ribeira and then wondered off to see Arraial Pride at the Praça do Comércio (aka Terreiro do Paço).

Arraial Pride
I arrived at the Praça do Comércio around 4:30, about half an hour after the party had started. There are a few things to remember about this: Lisbon Pride is effectively split into two: there is the Pride March, which took place last week…. and then there is the party – or Arraial Pride. The “party” is right in the centre of Lisbon – on the amazing Praça do Comércio, open to the Tagus on the one side, and surrounded by palatial buildings on the other three sides. Quite a setting for a party! 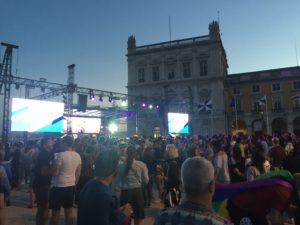 The set up is essentially bars around the outside of the square, with a stage at the side facing the river. This creates a sort of “village” atmosphere. What struck me immediately was that most of the bars were run by the existing gay bars: i.e. rather than being run by commercial operators or drinks brands (like in London, for example), At Arraial the bars had simply set up shop in the tents surrounding the “Pride Village”, making it a pretty much community run event. Actually, the relative absence of any big commercial sponsors and tents etc made the vibe quite different: more like a community party than some of the prides in Northern Europe and the US.

During the afternoon many people seemed to drift in and out of the space (including me)… So in the afternoon, it felt a little like an informal gathering of friends, having a good time and a drink or two in the square. Most of the bar tents had chairs outside, so this made it feel even more like a LGBT “Plaza Mayor” (if you forgive me the Spanish comparison). Very relaxed and not unlike Brighton Pride – just with the park being exchanged for the square we were on. 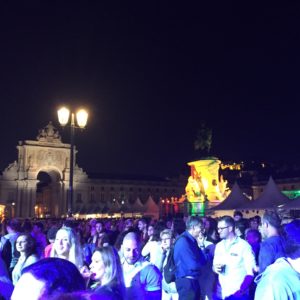 It wasn’t until late at night (and even more after the football had finished) that things turned more party-like: As the sun set, the various bar tents removed the chairs from the large square in the middle, and eventually more and more people poured into the “village”, effectively turning it into a massive outdoor party. With a variety of music shows on stage, a glorious sun set behind the stage … it wasn’t hard to enjoy the evening.  The later the evening, the more people seemed to join – I guess inside or out, Lisbon parties late. And with the program running until 4am, it wasn’t hard to see that this certainly was the place to be this Saturday night.

Overall, I really recommend coming to Arraial Pride. It certainly is a very different, and much less commercial, experience than big prides like London. But, it feels like a massive community event. With no expensive after-parties or sponsored entertainment, it really is a party for everyone. Basically it feels like the LGBT-community is throwing a party – and everyone is invited, and yes, you don’t have to be LGBT to join. And being set on one of Europe’s most breathtaking squares – it certainly is a truly amazing experience.