Isn’t Pride just a commercialised street party, sponsored by big brands and full of pretty boys in skimpy clothes? And anyway, does it still matter?
I recently posted about my summer plans, which include going to both Lisbon’s Arraial Pride and Orgullo in Madrid.  Pride in many countries has become a big business: Madrid Pride brings around 2million people onto the street, London Pride is awash with big businesses sponsoring it. And yes, I totally understand that some people get completely fed up with all the commercialism taking over what once was a profoundly political event. Similarly, with Portugal being 4th, the UK 3rd and Spain 6th in the annual ILGA Rainbow Ratings, it seems hard to argue that life as a gay men faces heavy discrimination in those countries (not fully equal mind you… but nowhere as bad a s 20, 30 years ago). So… why bother going to attend Pride? Here is my somewhat personal list of reasons you too should come out to join Pride:

… we are still not totally equal
Take the equality ranking from ILGA. The highest score a country has achieved is roughly 88%. That’s pretty good. But it isn’t 100%. Many countries, even in Europe, have scored less than 50%. So until we are fully, 100% equal, there is still work to be done. And even then, simple equality in the  law may not be the full answer.

…we shouldn’t take our rights for granted.
Think of countries like Turkey or many of the Eastern European countries. A few years ago, things seemed comparatively liberal there. But things have changed, and many people live again in fear and are being discriminated again. So we shouldn’t sit back and say “it is just a party”, even if much of it is. It still also is a massive sign of solidarity, visibility – and a loud shout out to everyone that we won’t be silenced. 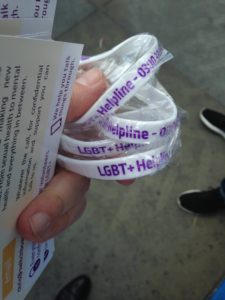 …it is a place to remind us about the community
Yes… much of Pride is hideously commercial. But if you look a little beyond the glossy surface of Barclaycard sponsored stage acts and Starbucks coffees… it is still a an event that draws together the massive community of LGBTQ+ people. And that is amazing. Picture someone from a small town. Maybe someone who isn’t out yet… Being surrounded by people celebrating what that person struggles with is pretty amazing.

… it is a place to find out about the local community
Many volunteer organisations come to Pride and that offers anyone the unique chance to find out more about them. So, look away from the corporate floats – and check out the community village. If you are thinking of volunteering or joining a social club, getting active in a gay sports group… this is as good as a one-stop shop to check out which organisations are active in a city, and where you can join. In fact, it is probably the best opportunity to become more involved!

… it is a place to find out about the global community
Often you also have international groups, or human rights groups which are active on the international front taking part. And yes, maybe you can list all countries where being gay is illegal, but here is a chance to remind yourself of that. And find out how you can help… speak to the people who have come from those countries!

… it is a powerful image to the world 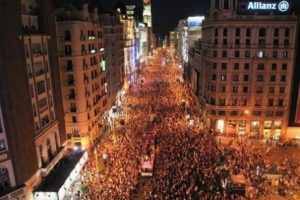 Let’s face it: Hundreds of thousands of people on the street celebrating sexual diversity is amazing. Look at it from the point of view of someone from a country where it is illegal. How much hope can an image of streets filled with people celebrating their freedom give to them?

…it’s (not) all about sex
Pride is pretty sexy… But what is wrong with that? After all, can you be a happy gay, lesbian, queer, whatever person if you can’t celebrate sexual diversity? OK, you may be in a monogamous, happily married and “widely accepted” relationship. And that’s great. But it doesn’t mean that alternatives forms of sexual expression are less deserving of being accepted, especially by someone whose relationship, 20,30 years ago, would have been pretty shocking to many people. So, embrace that there are many, many forms of sexuality – and it is great that they can be on display in a supportive environment. So come along and party (and maybe learn a thing or two)! Being sex-positive isn’t a threat to a relationship. [And if you are single… who knows whom you might meet?!]

… we need more than “pretty boys” to come!
I agree that much at Pride is about ‘pretty, young, gay, white boys’ having fun. But that doesn’t mean that you shouldn’t join in. I know sometimes it is hard when you are not cisgenderd, not “just gay”, disabled or just don’t fit the ‘pretty, young, gay, white boy’-image often associated with the event. BUT that is precisely why you should come. If you think you don’t fit in, you’re too old, too not quite right for it, not pretty enough, not … whatever your reason: you should be there: Don’t become invisible.

P.S.: I drafted this before the Orlando massacre, which bring an entirely new dimension to the entire purpose of Pride. I don’t want to comment on the Orlando event itself – others have done so more eloquently and meaningfully than I could ever do it. But if it is true that not an event, but the reactions towards the event define a society, then especially …

… now more than ever
Homophobia is a reality, not just homophobic terrorism – but also those that support them. Or, even in an “enlightened” country like the UK refuse to understand what homophobia really is – or refuse to acknowledge it – or “straighttalk” it (just watch this). And as long as a major newspaper thinks it is better to talk about pearl earrings than an attack on the LGBTQ+ community, we need to be out there and show that we are there. Shoulder to shoulder, hand in hand – and together with our allies and friends.

Pride: Why we should go – and why it still matters
Tagged on: Arraial Pride    Gay    Gay Rights    Lisbon Pride    Madrid Pride    Pride

Four Alternative Ways of Meeting New (not only gay) Friends

2 thoughts on “Pride: Why we should go – and why it still matters”