Our weekend away was pretty much an exploration of the coast around Albufeira. Prior to heading there, I had fairly little idea what we would find. I somehow imagined that it would be a bit like some of the Costas you can find in Spain: with large hotels and long beaches. To come straight to the point: It is not, although it has some aspects of it.

Albufeira itself is a pretty cute little town.

Yes, it has a *very* pulsating nightlife, with many bars, clubs and restaurants in the main city. So if you are out there to party for the night – I’m sure you can find a lot of fun there. Other then some of the main tourist sites in Spain, it isn’t “overdeveloped”, i.e. don’t expect massive hotel complexes around the town. However, you can find the trappings of tourist invasion around: From Full English Breakfast to Currywurst… (both of which are not at all my idea of heaven in a hot climate, but so be it).

General impressions
Please bear in mind that we were only in Albufeira for two nights, so this can’t be an in- and out-guide of the place. There seem to be a few people who consider Albufeira the “worst” of the Algarve region: I can’t tell you, as it is the only place I have seen. But, honestly, if this is the worst… then you can do a lot worse! It still is a pretty nice town… and see below for some ideas about quiet beaches.

One thing to note are prices though. While they are generally much cheaper than you’d expect them to be in Northern Europe, prices for drinks and food are pretty expensive by Portuguese standards. Generally drinks and food cost about a third more than in Lisbon – though at least in the places where we ate, we didn’t find that the quality measured up to the high price tag. Not that the food was bad, but, if you pay €15 for a main course in Portugal, you’d expect something quite impressive in Lisbon. 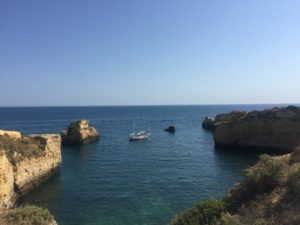 The main draw for me are  the beaches and the coast. Now this is where Albufeira is amazing … especially if you wander a little away from the mainstream.
Albufeira itself does, of course, have a beach. It’s nice, and convenient, especially if you have accommodation close by. It is also rather large and a bit crowded (see picture above).

If you fancy something more individual, you can take a taxi or a bus to one of the beaches along the coast. These tend to be much smaller and nicer. There is a good beach guide available here, which let’s you check the various beaches, and shows which facilities they have etc. 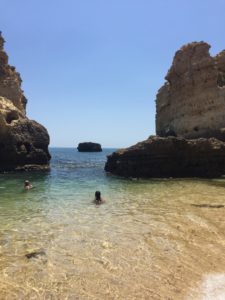 We went to Praia de São Raphael and used it a bit as a starting point. From here, you can wonder along the coast on top of the cliffs until you come to a beach you like. This is where you get the picture book experiences: large, yellow cliffs, empty beaches and deep blue sea.  Note that you should take water with you, and that the path is not paved – so “sensible shoes” make sense 😉 . Bearing that in mind, you’ll be rewarded with some really awesome views and beaches.

You can ultimately walk along the cliffs all the way to Galé. If you want to take a break, just stop at one of the “official” beaches. All of these have restaurants, showers, toilets and you can buy food and drink there.

Generally, I think Albufeira was quiet nice. I wasn’t overly keen on the nightlife, but it compares pretty well with resort towns in Spain. On the other hand, the town is much prettier than some of the more “developed” towns on the costas. The main draw to come back for me would be the amazing coastline between Albufeira and Galé. 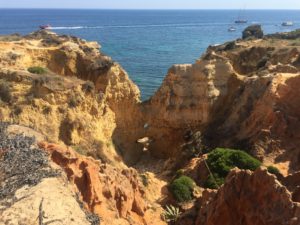 If you have any tips, hints or suggestions … please share them below.

Weekend… Off to the coast by Rail