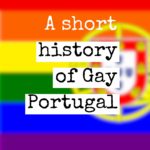 Living under the constant threat of being discovered, gays also started to adopt a specific language (much like the much later Polari found in the UK). Using terms not usually associated with sexual activity, such “hunting” to describe looking for sex or “being in the afternoon” to describe another gay person, prevented people ‘not in the know’ from understanding the verbal code used to communicate.

The reformed penal code of 1852 did not contain any references to homosexual acts, effectively legalising them. However, social morals still remained skewed against gays, although homosexual acts did not lead to the same scandalous consequences as in other countries at the time. This tolerance gave Portugal the status of a comparatively liberal country, at least when compared to countries such as Germany or the UK where gays were openly prosecuted by the police at the time and homosexuality was a crime (e.g. Germany recriminalised homosexual acts in 1871, in the UK, homosexual acts have been illeagal since 1533).

This relative liberal outlook lead to some pioneering works about homosexuality being published within the Portuguese Empire at the time. This included works such as A Inversão Sexual, by Adelino Silva, which, when published in 1895, was one of the first works to analyze ‘scientifically’ the topic of homosexuality (by comparison, Magnus Hirschfeld’s work “Die Homosexualität Des Mannes Und Des Weibes” was published almost twenty years later, in 1914). Despite of this, homosexuality was still often seen as a mental illness which needed to be treated. For example, Egas Moniz, the first Portuguese nobel laureate and inventor of the highly controversial lobotomy, classified homosexuality as a mental illness, and counseled that it should be cured like any other mental illness (which, in his case, presumably involved drilling holes into heads of patients).

The First Republic
The end of the monarchy in Portugal, and the establishment of the First Republic in 1910, didn’t change much in terms of societal attitudes towards gays and homosexuality. While homosexuality remained technically legal, interest in it came mainly from a medical perspective: Assuming that it was an illness and needed treatment. As such, books which appeared to condone homosexuality were often banned or seized. Much in contrast to the more liberal attitudes of the rest of Europe, Portuguese society in the 1920s became more conservative: In fact, Portugal was the only European country not to send any delegates to the World League for sexual Reform initiated by Magnus Hirschfeld in London in 1929.

After Salazar established the authoritarian regime of the Estado Novo in 1933, things took a predictable turn for the worse: Salazar advocated a return to Catholic doctrine and conservative values. Gender roles were reverted to become more traditional, and all expressions of sexuality outside of marriage were frowned upon. Sexual expression was seen as subversive and books, scripts or other artistic works advocating any form of sexual expression outside of marriage and as a means to reproduction were systematically censored, and artists, writers and advocates were criminalized.

In 1954, homosexuality was recriminalised, with people engaging in “crimes against nature” facing being being locked up in mental asylums or condemned to hard labour. The Portuguese secret state police PIDE systematically hunted homosexuals or spread rumors about opposition and resistance fighters, including famously the then president of the opposition Portuguese Communist Party Júlio Fogaça. Fogaça subsequently was expelled by the Communist Party, while serving a prison sentence, in 1961 under the pretext of homosexual conduct.

Please bear in mind that I’m not a historian (nor Portuguese for that matter…), but just compiled this based on my reading. It would be great if you could add any omissions or corrections below! Thanks!…Of course, I also realise that I have mostly focused on gay items. I hope I can find out more about lesbian and trans history in the future and share it here!
>> Next time… The Carnation Revolution to modern-day Portugal.